RSPO’s 17th Annual Roundtable Meeting on Sustainable Palm Oil (RT17) gets underway today in Bangkok. The issue of palm oil certification will be a key topic of discussion and is often a target of criticism: from NGOs that dismiss certification as greenwashing, through to those that consider it an unnecessary cost imposition on the palm oil industry.

The difference between the two systems is clear. One – Forest Stewardship Council — is a private certification system that operated between buyers, sellers and NGOs. The other – the Programme for the Endorsement of Forest Certification Schemes – is about the development of national industries and national certification standards.

This contrasts with the development of private standards, as was the case with palm oil.

The idea for an equivalent for palm oil first emerged in the early 2000s, as a collaboration between Swiss retailer Migros and WWF Switzerland. This eventually won the support of Malaysian company Golden Hope (which became part of Sime Darby) and the Malaysian Palm Oil Association in 2003 before spreading through the industry as the brand that is now known as RSPO.

That cooperation between the three interested parties of buyers, sellers and NGOs created the world of palm oil certification. Growers in particular had, and continue to have, a strong interest in highlighting and showcasing the positive and sustainable manner in which oil palm is cultivated. Sustainability schemes are by no means the only method by which this is achieved, but they are a valued part of the current palm oil community.

Palm oil is arguably the most certified commodity on the planet – a fact that seems to be lost on many critics who accuse palm oil growers of ‘not doing enough’. The simple, and unarguable, fact is that palm oil is doing more than any other commodity in the world to certify and demonstrate sustainability. Here’s a reminder of the footprint of certified palm oil compared with high-deforesting global commodities, namely soybean and beef.

Certification in the palm oil sector is no longer a one-horse race, as RSPO has been joined by the national standards of Indonesia and Malaysia. The certification levels of ISPO and MSPO are on their way to increasing significantly – with the advent of implementing mandatory MSPO certification across Malaysia, and the Indonesian government agreeing to bear the cost of certification of smallholders across Indonesia.

Given that RSPO has been in place for some time, why was the introduction of national-level schemes necessary?

The original intent of RSPO was to provide assurance of sustainability for European buyers of palm oil from particular buyers. It was not originally designed to speak to sustainability for the entire sector or for an entire country, or to assume a public-facing role as a spokesperson for the palm oil community. This role has changed and grown significantly over time – but the origins of RSPO remain important to understanding the organisation’s position. RSPO has always had some orientation towards the sustainability concerns of the buyers and retailers – this was its original raison d’être – but as the roundtable grew that inevitably meant that others, primarily growers, felt their approaches and ideas of sustainable production were not sufficiently center-stage.

An oft-cited example of this Catch-22 dilemma is Unilever. The Dutch company introduced traceability requirements for its palm oil supply, delighting many in the NGO community and other environmental cheerleaders in Europe. However, in doing so Unilever admitted that it removed thousands of small farmers from its supply chain. This can hardly be considered sustainable, and certainly not in the common interest of the entire palm oil community.

This is where national schemes come in. 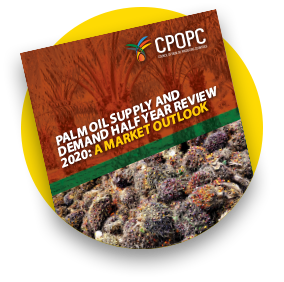 A Market Outlook is compiled to update the World Palm Oil Outlook Report published by CPOPC in January 2020.